Created in 2011 by Donnie Maclurcan of the Post Growth Institute, the OANM emerged in response to the detrimental effects Donnie saw global capitalism having on his community. Individual trust was being eroded. Small, family businesses were being  ruthlessly undercut by online marketplaces and massive corporations that were engaging in heartless takeovers. In a system predicated on inequity and a deepening sense of ‘never enough’, the growing addiction to ‘low-cost’ products reliant on human and environmental exploitation was obviously unsustainable. It also seemed unstoppable.

In response, online, peer-to-peer exchange platforms emerged, attempting to strengthen communal exchange and other forms of solidarity. But they often proved inefficient, lacked innovation, were financially unsustainable, or were dogmatic about their exclusion of monetary exchange. Few failed to reach a critical mass of users. If they did gain popularity, they were commonly co-opted by corporate interests (for example, the ‘sharing economy’, or the specific case of Couchsurfing).

Donnie felt that a community-owned process for local exchange, rather than a platform, might offer greater immunity to co-option. And that such a process needed to build on insights from asset-based community development, human scale development, indigenous sharing circles, the Social Solidarity Economy, mutual aid, and online commerce, while complementing existing practices such as time banking, gift economics, and local exchange trading systems. More than anything, he felt that such a process must efficiently meet the full spectrum of human needs.

This is where the Offers and Needs Market is shining. Worldwide, more than ten thousand participants have benefited from the OANM’s intentional design, highlighting that there are healthy, local alternatives to exploitative global economics. Its diverse application continues to expand, from electrical cooperatives in the US, to youth groups in Zimbabwe. 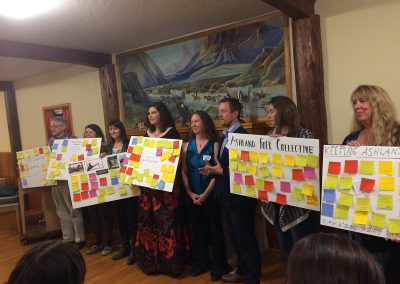 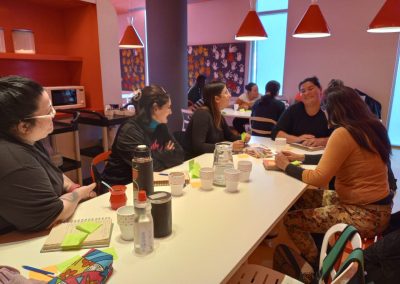 After the 2022 primary, campaign organizers in North Carolina asked me to facilitate an in-person Offers and Needs Market as a closing celebration activity. There were a lot of land-based offers and needs in this group! As a result of the event, the organizers decided to facilitate rotating work days on the participants’ land and they wanted to start with me as a thank you for facilitating. Right before finding out this offer was going to be made, I’d collapsed onto my knees on the land asking for Divine encouragement to keep at the task of tending a new food forest while trying to get a food cooperative to materialize.

I’ve facilitated at many conferences where connections are made for a moment, but their potential never comes to fruition. The Offers and Needs Market changes that paradigm and connects us to the next level of community thriving.

As the OANM’s benefits have spread, so has interest in learning its design. Led by the Post Growth Institute’s Director of Education, Crystal Arnold, a global team has spent the last 5 years developing the materials, training, and support for those seeking to bring the OANM to the world. Since 2020, more than 200 people, across 24 countries, have completed the OANM’s basic facilitator training.

In the coming years, our vision is for the OANM to become a regular practice, worldwide, for community reconnection, economic regeneration and environmental stewardship.

Your involvement can happen in different ways. You can experience an OANM, join a facilitator training, or simply spread the word.

In whatever way you’d like to engage, we’re excited to have you with us on this evolving story.

Yours for a future that recognizes the richness of our interdependence. 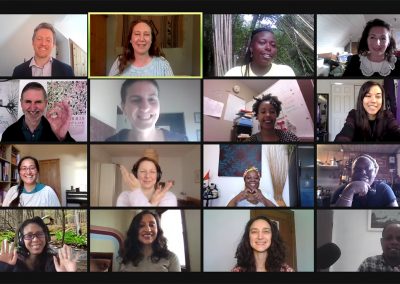 The Offers and Needs Market Facilitator Training in April 2021 with an international group including Enough! Scotland and Chicago’s Kola Nut Collaborative. 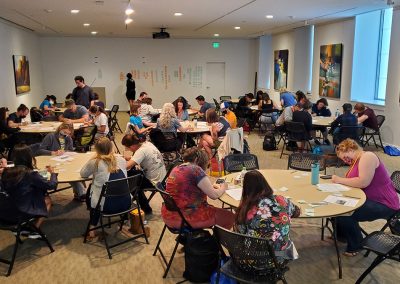 An Offers and Needs Market in Portland, Oregon, June 2022 facilitated by Joel Zaslofsky. 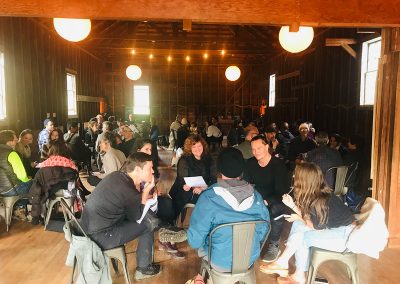 Denizen Retreat Offers and Needs Market in California, May 2021 facilitated by Donnie Maclurcan

Thank you to our funders, including: RSF Social Finance, The New Economy Coalition, The Whole Systems Foundation, and the Royal Society of the Arts.